Menu
Log in
Register
Install the app
You are using an out of date browser. It may not display this or other websites correctly.
You should upgrade or use an alternative browser.

Pin 2 of IC43 is not showing anything like a 16MHz wave so I suspect this circuit. The gate IC tests ok although the Hex inverter actually fitted to my Master is a 74LS04 rather than the 74S04 specified in the manual but I doubt that should be causing the problem as 74LS while slower, should be ok for 16MHz I would have though ? This clock is then split at the video processor into 1,2,4 & 8 MHz clocks and none of them are stable and the whole machine is going crazy (the cassette interface relay clicks like mad !)

So maybe a failed capacitor. Thing is, the capacitors in the service manual are listed as CPLT, which I cant work out what they are.

Anyone know what a CPLT is short for ?

I probably can use a Mica capacitor I think, can get them in 2% tollerance but RS want £30 for one 10nf unit ! but I also note the discrepancy between the drawing and the parts list

I don't know about the CPLT (but ceramic plate ... comes to mind).

The 74LS (to my mind) will be too slow, and why the 74S would have been specified in the first place.

Thanks Dave, you are probably right. I have ordered some 74S04's though I suppose some HCT's would have done the trick but might as well stick with the original spec.

This machine has been right royally messed about with, no PSU and half the chips seem to have been re-socketed. Good job it was really cheap.
S

I tend to agree with Daver2 that it will have been specified as 74S04 for a reason, when it would have been easier just to use a standard 74LS series otherwise.

Yes, already tried pin 2 disconnected to make sure it wasn't a problem down stream.

But this morning, got the S04's and put one in before I went to work and on power up the cassette relay clicked once, indicating its been addressed correctly. Didn't have time to connect up anything else or check the output on the scope but its looking better.

As you say, its an S04 for a reason, 16MHz gives a 62ns cycle, and an LS switching is about 30ns, so marginal especially once propagation is factored in by the looks.

It does look as if the previous owner has socketed many chips trying to find out what was causing the problem, probably didn't have a scope.

So with the 74S04, I now have the 16MHz clock and the Video processor is producing the 1,2,4 & 8 MHz clocks. The CPU is running (pin 7 toggling) and the ROM and RAM both show activity but the machine doesnt.

Looking around, I am not getting any activity out of the IO processor IC15.
S

Do you have a link to an online copy of the service manual or circuit? I have the SM for the BBC B, but not for the Master.

Yep, got the Master service manual and it does mention IC15, but not really in regard to diagnosing it.

Found a replacement from a reputable seller for not much so going to swap it anyway, but I have a niggle that its not being asked to work, rather than not working itself.

Just helped remotely diagnose a problem with our cards.

It looks as though someone had previously replaced a 74HC240 with a 74LS240. The HC device was specifically chosen for its increased noise immunity. Yes, a 74LS240 will physically work - but it is not reliable in a noisy environment. Guess what, it was unreliable...

Yep, got the Master service manual
Click to expand...

Um, I got that. What I meant was, is there anywhere the rest of us can find an online version to make it easier to follow your case?

The I/O processor seems to run as the chip select decoder for most of the peripheral chips including the CRTC and the VIA's but I am getting nothing out of it.

Looking at it, it uses a couple of data lines AD4 & AD5 plus some address lines. AD4 & AD5 are a right mess. 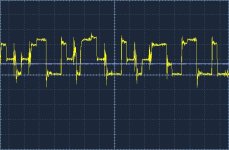 But if I pull the memory controller IC out, it reverts to a nice square wave, and not only that, the IO controller suddenly starts doing something.

Think its time for a new mem controller, which is a shame as its an Acorn custom chip.
S

Thanks for the link, although the quality of the circuit diagrams in that particular copy is dire (not your fault, I know). I have a policy of not automatically assuming that the fault is the expensive / unobtainable thing. The memory controller may be working properly but it might be enabling other elements (such as damaged memory ICs) which have one or more stuck bits and are causing that bus chaos.

The manual warned you that running without a working clock could potentially damage the RAMs, do you have any way of independently testing the RAM ICs, maybe a specific tester or maybe another, working computer which can accept the same RAMs?

My ram tester wont take 4464's but the data line corruption is identical with them out of circuit.

Fortunately, the mem controller IC isn't that expensive from a reputable supplier and given I have quite a few Masters to maintain, its probably worth having a set to hand.

Ok, so I have no idea of the history of this machine but can only surmise that its been well and truly buggered about with.

No idea what they were up to.

I'm wondering if you should now just go through the whole chip parts list and replace non-original parts (where found) with the original specified parts. That alone probably won't get the machine working but it should eliminate a few unwanted uncertainties.

Yep, thats what I was doing when I noted the drawing said HCT's

I though that if they had swapped one, they might have swapped others. I am assuming someone though to test all the logic chips with a tester and hadn't clicked that some types don't test properly on some testers and believed a) that they were faulty and b) that any old logic chip would do.

I was looking at equivalent parts (like a 74AHCS153 which the Ti website suggested) as RS don't stock HCT versions but decided to stick with the same spec but they are going to take a couple of weeks from Bulgaria so have gone PET playing for a while.

And worth updating the thread.

It's always good when a plan comes together!

Probably been 'played with' previously by someone who didn't really know what they were doing...